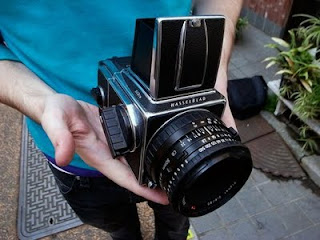 This weekend I shot my first roll of film in 4 years. "Film? What's that?" I hear some of you cry. Well, after a month long assignment shooting 10,000 frames with my pair of Canon 5D mark IIs I felt like slowing down and getting back to basics.
So I rented a Hasselblad from Calumet. No, not a space-age 39 megapixel H3D, but a V-series 503 CW (pictured), the design of which is essentially the same as the 500C made in 1957. Along with an 80mm f/2.8 Carl Zeiss lens, a film back and a light meter I was ready to go. Yes sir, a light meter - because the 500 series Hassies don't have one built in.
I spent the morning reminding myself how to load the film and use the light meter, and then it was off to take some pictures. The 10 step process goes something like this:
1) Find and interesting subject
2) Get out the light meter, set the ISO to match your film speed, and take an exposure value (EV) reading
3) Set the EV on the lens to lock in a shutter/aperture combination, and then rotate it until you have the particular shutter speed/aperture combination you want.
4) Remove the dark slide between the body and the film back
5) Frame your shot in the waist level finder. Not as easy as it sounds as the image is flipped left -to-right, so you keep moving the camera in the wrong direction.
6) Flip up the 4x magnifier in the viewfinder and focus the lens manually.
7) Check the depth of field scale on the lens to ensure you will have the correct amount of the scene in focus based on your chosen aperture and focusing distance.
8) Take a deep breath and press the shutter release. There is a huge "clunk" as the mirror swings up and a small "click" and the leaf shutter in the lens snaps shut.
9) Crank the winder to re-cock the shutter, wind on the film and return the mirror so that you can see through the viewfinder once again. No instant return mirrors here.
10) Hope that you took a decent picture!
With each press of the shutter costing £2 in film and processing costs, it's probably just as well that the magazine only gets 12 shots onto a roll of 120. But it certainly makes you think twice before you press the shutter. Is this an interesting shot? Have I metered the scene correctly? Is my focusing spot on? Can I handhold at this shutter speed?
It was nice to get back to a slow, methodical way of working, and having to think both aesthetically and technically before spending £2 on each shot. Over the whole weekend I shot 2 rolls of film, or 24 pictures. Using a digital camera I might have taken that many in a minute. But I expect the proportion of keepers from my 24 will be pretty high and I wouldn't be surprised if I get as many keepers as I would with 500 frames that I might shoot on a 5D in a weekend.
For those of you that have only gotten into photography during the digital age, try renting out and old medium format film camera one day. I think you'll enjoy it.
I'll post my favourite photo from the weekend once I get the film back from the lab and scan it in... Welcome to Old Skool!
Posted by Julian Love at 19:10 5 comments: 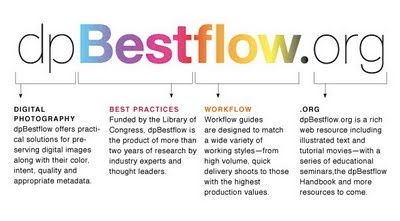 The ASMP (American Association of Media Photographers) are a professional body similar to our own AoP here in the UK. They have just launched a fantastic resource for working photographers - the dpBestFlow website. It covers in detail everything you need to know about digital imaging standards for professional work, including:
- Calibrating your monitor, printer and camera
- Practical colour management, soft-proofing and CMYK conversions
- Delivering files to clients
- File management, naming, cataloguing, and keywording
- Backup and archiving your files
The information seems very well presented with lots of screenshots and videos.
Well worth a look.
Posted by Julian Love at 00:27 2 comments: 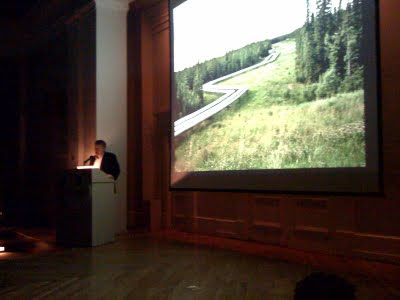 I’ve been on assignment in Washington DC the last few weeks, and happily my time coincided with Fotoweek DC. Earlier this evening I attended a talk by Edward Burtynsky at the Corcoran Gallery talking about his new show “Oil”. It is one of the most powerful collection of photographs I have seen, and his talk gave an interesting account of how his ideas have progressed over the years and some of the challenges he has overcome to document the places he shows us.

Burtynsky is one of the world’s most renowned fine art photographers, having made his name documenting the impact humans have had on the landscape. The genius of his photographs lies in his ability to make the tragic look beautiful. As he says, “anyone can photograph these things and make them look ugly. By making them look beautiful, people actually pay attention.”

He started out covering railways in the 1980s, and since then has pointed his view camera at quarries, the mining industry, and the explosion of manufacturing in China.

Over the last 10 years he has turned his eye to oil, and through it the impact we have had on the land. The show begins with a series of photographs of the hell-on-earth landscapes of the Canadian tar sands, to show us where oil comes from. Next, a series of aerials shows us the lifestyle oil has allowed – the endless suburbs of Las Vegas and the enormous motorways of LA. Finally, he shows us what happens when we are finished with it all. From the deserted oil fields of Baku, now one of the most polluted places on earth, to the ship breaking yards of Chittagong where bare-footed workers scrap oil tankers by hand, we get a glimmer of the future – of what the world will look like when we have run out of oil.

In spite of the beauty of the photographs, it is not a pretty sight.

You can see the curator of the show, Paul Roth, give a brief introduction here.