Having just finished writing up my experiences of using Elinchrom's Ranger Quadra light weight 400ws battery flash, Profoto have struck back by announcing an upgrade to the 600ws AcuteB 600 - the new Profoto AcuteB 600 AirS. 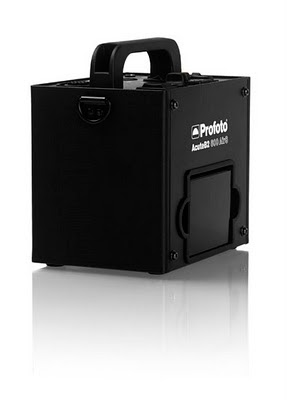 The new model has a Lithium Iron (LiFe) battery that reduces the weight by over a kilo and increases the capacity from 160 to 200 flashes. Contrary to the fears raised in my Quadra review, the lithium batteries have been certified safe or air travel. The new pack also integrates Profoto's new Air system to allow for wireless triggering and power control. These improvements now make it a formidable competitor to the Quadras I reviewed earlier.
In a nice bit of design, the new LiFe batteries will work in the old AcuteB generators and the  the old lead-acid batteries will work in the new AirS generators - so people with the older model can mix and match as they like. You can also use them while they are recharging (note - the Quadras may also do this, I'm not sure).
So to update my previous comparison between the Quadra and the AcuteB:


Profoto Acute B Cons:
- Bulkier and heavier (nearly 8kg for a pack/cable/head versus 5kg) - now only 6.5kg
- No ability to adjust output wirelessly - now has ProAir integration
- More expensive


So while it is still heavier and bulkier, the gap has reduced considerably, and you get the advantages of 50% more power and twice the battery life. If you throw in a spare battery for the Quadra to make it able to equal the AcuteB's 200 flashes, then the weight and bulk of the two systems are essentially equal while you still get to enjoy the extra power of the Profoto.


I typically rent my gear, but if I was in the market for a battery flash system right now then I'm pretty sure these would be at the top of my shopping list. Read an FAQ about them here.


If you need more power
In a related note, Profoto has also upgraded the B2, the AcuteB's bigger brother, with a new 1200ws unit called the Profoto B3 1200 AirS. Featuring the same new LiFe battery technology and ProAir integration, this is certainly going to be a welcome upgrade from the old 7b and B2 for those who need the extra power. The Elinchrom Ranger Speed AS, the 1100ws top-of-the-range big brother to the Quadra, is looking a bit  stale compared to this.

Thoughts on the Elinchrom Ranger Quadra

**Just updated with a few more details and some corrections**


On my recent shoot in Switzerland I used 2 of the relatively new Elinchrom Ranger Quadra battery powered flash units. As there is not that much information around on them I thought I would share my impressions here. 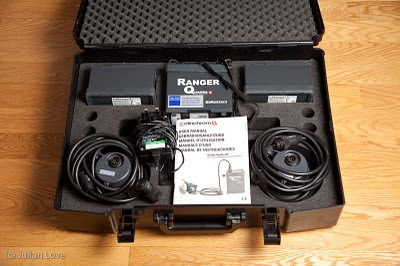 First of all, a bit of background. All my shoots are done on location, and I usually work with just one assistant. Taken together these two facts means my kit has to be lightweight and as portable as possible. Traditional battery pack flashes are large and heavy - a single Profoto 7b or Elinchrom Ranger (big brother to the Quadra) setup will weigh in at 12-15kg. In comparison, the Quadra is only 5kg all up - pack, cable and head. Because of the light weight, it is also possible to use a light weight stands, which save you another kilo or so. 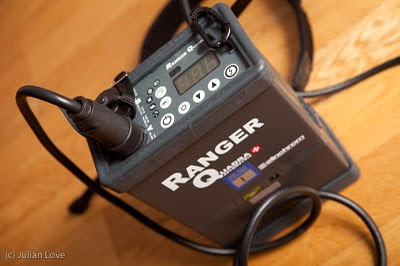 Firstly, they are small, and the heads are in fact tiny. 2 packs, 2 heads and 2 spare batteries will easily fit in a Lowepro Photo Trekker backpack with room to spare for a camera body and a couple of lenses. Build quality of the packs is quite good, if not as bullet proof as a Ranger or Profoto 7b. The heads are rather flimsy however, with the reflectors built of quite thin metal that bends easily.


Secondly, the heads are not supplied with any covers for the flash tubes, which makes travelling with them a bit nerve wracking. Luckily we didn't break any but I wouldn't be surprised if they would break occasionally in regular use unless you treat them with kid gloves. UPDATE - I've just been told that they are now shipping with a cover for the flash tube so it looks like this has now been addressed (thanks Dave T.)

So just how powerful are they?

The Elinchrom Ranger Quadra is rated at 400ws. That's about a stop and a half less than its 1100ws big brother, the full size Ranger, and the 1200ws Profoto 7b or Profoto B2. How much more powerful is it than a speedlite? Well, one of the problems in comparing battery flashes with hotshoe flashes is their power is rated differently. Battery flashes are measured in watt seconds, while hotshoe flashes use a guide number. The easiest way to know for sure is to test them, which is what I did.

I ran a quick test of the Quadra versus a Canon 580 EX II and a Nikon SB28. I set them up at a distance of exactly 3m from an evenly textured wall and varied my aperture until they provided the same level of illumination, as judged by the histogram on the back of the camera. All were on freshly charged batteries and at full power. I got the following results at 24mm on a full frame 5D mark II at ISO 100:


One of the big advantages of battery flashes over speedlites is the range of light modifiers available. The Quadra heads have a built-in mount for a shoot through umbrella, and Elinchrom also make a 40cm soft box for them. Using a relatively lightweight adapter you can also attach any of Elinchrom's other modifiers for their larger heads, including the highly rated octaboxes.


I only had the chance to use them with shoot through umbrellas, but the mounting system is quick and easy, you just slide them in. Be advised all Elinchrom brackets use the non-standard 7mm shaft, so you need brollies especially designed for Elinchrom.

OK, fine. But how do they perform in the real world?

Unlike a speedlite, the Quadras do have enough power to work as key or fill light on a reasonably sunny day, even when shot though an umbrella. Here's an example shot in cloudy bright light. With the pack on half power (200ws) the flash head was being held on a boom and being shot through an umbrella about 2m above and in front of the subjects. Recycle time is less than 1 sec.

The highlight on the right side of the models' faces is from the sun. The illumination on the rest of their faces is all fill light from the flash/umbrella combo. By way of comparison, here is a similar shot taken without the flash as I fired before it had recharged: 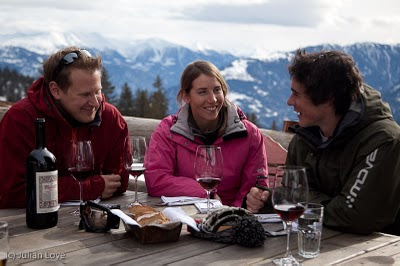 To do this with a speedlight would have required full power and about 5 seconds recharge between shots - way too slow for me. And if the sunlight had been any stronger I would not have been able to balance it unless I shot without an umbrella, giving harsh, unnatural looking light.

Shooting lifestyle images like these requires a lot of shots. Once you set up the initial parameters, the models have to interact with one another while you shoot away to try can catch a natural moment. With a fresh battery the recycle time starts off at around 1 second, but it rapidly increases as the battery loses charge. In fact after about 80 shots the recharge was so slow (4 secs plus) that we needed to change batteries. So plan on carrying spares for a day of shooting.


Another thing to mention is the Quadras have Elinchrom's wireless Skyport system built in, so you can adjust the power of the flash from on camera, using a small device that sits in the hotshoe. It is much smaller than a Pocket Wizard Plus II (which is what I normally use), and allows wireless power adjustment of multiple groups, not just triggering, which is pretty neat. When working with an assistant it's not quite as important, but when working alone this would be a really handy feature.


The competition
So what other choices are there out there? As far as I am aware, the only other lightweight battery pack from a major manufacturer is the Profoto AcuteB 600. I've used these packs a few times, and here are their main pros and cons versus the Quadra:

Profoto AcuteB Pros:
- Half a stop more power (600ws versus 400ws for the Quadra)
- More flashes (160 at full power versus 100)
- Faster recycling (1 sec versus 2 secs at 400ws)
- Takes all existing profoto modifiers without an adapter

Profoto Acute B Cons:
- Bulkier and heavier (8kg for a pack/cable/head versus 5kg)
- No ability to adjust output wirelessly (no ProAir integration, while the Quadra has Skyport)
- More expensive
So it's a bit of a mix up which is better - it depends on what you are looking for. Overall though I was very happy with the Elinchrom Ranger Quadras. What I would like to see is a longer lasting battery - Lithium Ion anyone? (or maybe not - see the comments from Dan Carr below), more sturdy reflector and a cover for the flash tube when travelling (looks like they've fixed this now).


Otherwise I think Elinchrom are on to a winner.

Here are a few other people's thoughts on the Quadras:
- Drew Gardener
- Simon Keitch
- Neil Turner, part 1 and part 2
- Zack Arias - comparison with other options (thanks Dave!)

No Plastic Sleeves is a great blog set up by Danielle Courier where she displays and evaluates photographers' and designers' portfolio packages. She's just published a book with all her knowledge summed up in 270 pages. From the blurb:

This text will guide you through the complete process of conceptualizing, designing and developing all the interconnected aspects of your total portfolio package:

It's available for pre-order on Amazon, and is released at the end of the month. You can preview the table on contents and introduction on her blog. I've just ordered my copy, and I'll post my thoughts here once I've had a chance to read it. But if the quality of advice is as good as the blog then I'm pretty sure I'll be a happy customer.
Posted by Julian Love at 16:34 No comments: